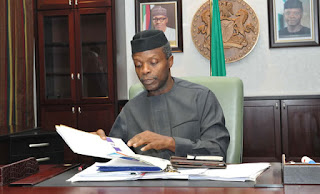 The Vice President believes the modular refinery initiative which featured prominently in recent talks between the Federal Government and the oil-producing areas, as represented by PANDEF, will also reposition the petroleum industry and ensure self-sufficiency of petroleum products while serving as a disincentive for illegal refineries and oil pollution.

The statement explained that at an end-of-the-year review meeting of the Niger Delta Inter-Ministerial Committee at the Presidential Villa, Abuja, before the holidays, Professor Osinbajo noted that the Federal Government, in line with its Niger Delta New Vision, is targeting measurable objectives in its efforts towards implementing development projects in the region.

Noting the issue of funding as a major challenge to most of the investors, and the primary reason holding further progress of the refinery projects, the Vice President directed the Federal Ministry of Petroleum Resources to keep providing the necessary support and creating the enabling environment for positive investments in modular refineries by engaging key government agencies.