Three times further away from the sun than the Earth lies an enormous lump of metal.
Around 252km in diameter, the metallic ‘M-class’ asteroid 16 Psyche is the target of NASA’s next mission to the belt of giant rocks that encircles the inner solar system. And the space agency now plans to visit it much sooner than originally planned.
Dr Elkins-Tanton has calculated that the iron in 16 Psyche alone, would be worth $10,000 quadrillion (£8,072 quadrillion).
Assuming the market for asteroid materials is on Earth, this could cause the value of precious metals to plummet, completely devaluing all holdings including those of Governments, and all companies involved in mining, distributing and trading such commodities. Ultimately, it could lead to the collapse of the entire economy. 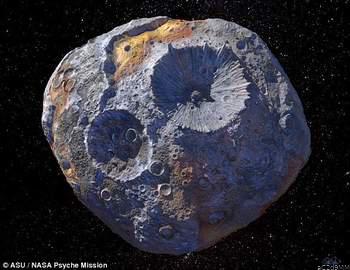