A plague outbreak in Madagascar has infected 1,192 people since August, with 124 deaths, the United Nations Office for the Coordination of Humanitarian Affairs and Madagascar’s National Bureau of Risk Management and Disaster reported on Monday.
Pneumonic plague is more virulent or damaging and is an advanced form characterized by a severe lung infection that can be transmitted from person to person via airborne droplets such as through coughing or sneezing, for example.
Charlotte Ndiaye, WHO representative in Madagascar, added that about half the deaths are occurring in the community, not health centers, according to government figures, which demonstrates that more work needs to be done to help people understand that treatment is available, and they need to go to health services as quickly as possible.
Plague is endemic to Madagascar, with an estimated 400 cases reported there every year, mostly the bubonic variety, but the current outbreak has affected more areas and started earlier than usual.
She explained WHO is working closely with Madagascar’s airport authorities to ensure control measures — such as temperature checks and medical teams — are in place at airports and ports to prevent the spread of infection outside the country.
UCJ, UNILORIN. 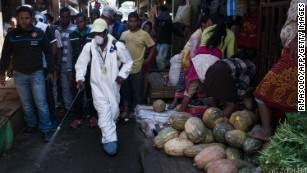