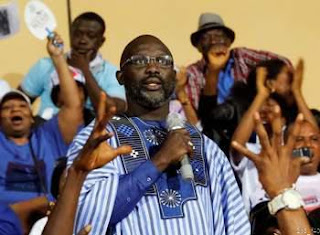 Weah – the first African to win the Ballon D’Or and FIFA World Player of the Year – won comprehensively, clinching 12 of the 15 counties in the West African country. His opponent Joseph Boakai, who has been vice-president for the last 12 years, only had two counties vote for him.

Jubilant Weah took to Twitter to confirm the victory: “It is with deep emotion that I want to thank you, the Liberian people, for honouring me with your vote today. It is a great hope. “

Weah topped the first round of voting in October but didn’t secure the 50% needed to win outright. The runoff was delayed twice after allegations of voting fraud and irregularities but Weah’s popularity won out in the end.

He will take over from Nobel Peace Prize winner Ellen Johnson Sirleaf who beat Weah in an election back in 2005. Weah’s lack of education was seen as the main reason for his loss.