An Airbus pilot in Germany has delivered an early festive present by tracing the outline of an enormous Christmas tree during a test flight.
The crew, which was testing an Airbus A380, produced a colourful image clearly rendered on the flight tracking website Flightradar24.
The tree, complete with baubles, stretched for hundreds of kilometres from Hamburg to Stuttgart in the south.
The tree was rendered in several colours, reflecting the plane’s varying altitudes. 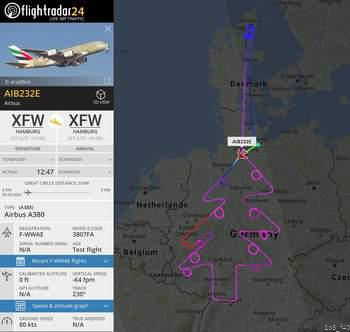