Israeli archeologists said they made a dramatic discovery adjacent to the Western Wall in Jerusalem after unearthing what they believe could have been a theater dating from ancient Roman times.
Excavations by the Israel Antiquities Authority are currently taking place underneath Wilson’s Arch, which stands next to the holy site in the heart of the Old City.
“What’s very exciting about this amazing structure is that we totally didn’t expect to find it here,” archeologist Joe Uziel said. “It’s a theater-like structure that held 200 people.”
The roofed building’s relatively small size, compared to other known Roman theaters, leads experts to believe it could have been an Odeon, a playhouse used for acoustic performances, rather than a larger amphitheater.
Another theory being considered is that it was a bouleuterion — a building where the city council would meet.
The structure also appears to be unfinished, as builders did not complete carving some of the sets of stairs.
Uziel speculates the theater may date from the time of the Bar Kokhba revolt, in the second century AD. “When [the revolt] erupts, the buildings were left unfinished in order to go and deal with the rebellion, but [perhaps] they never came back to finish it,” he told CNN. 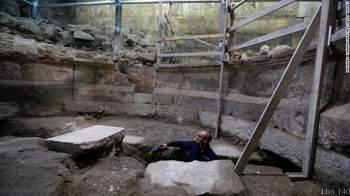