🇯🇴Jordan’s foreign minister has warned the 🇺🇸US of “dangerous consequences” if it recognises 🇮🇱Jerusalem🇵🇸 as the capital of 🇮🇱Israel.
Ayman Safadi said he had told 🇺🇸US Secretary of State Rex Tillerson such a declaration would trigger great anger in the Arab & Muslim 🌐world.
Speculation is mounting that President Donald Trump will announce the move soon, fulfilling an election pledge.
Jared Kushner, Mr. Trump’s son-in-law, said no decision had yet been made. In a tweet, Mr Safadi said: “Spoke with 🇺🇸US Secretary of State Tillerson on dangerous consequences of recognising 🇮🇱Jerusalem🇵🇸 as the capital of 🇮🇱Israel.
Such a decision would trigger anger across Arab ☪Muslim worlds, fuel tension & jeopardise peace efforts.” There was no public response from the 🇺🇸US State Department.
🇵🇸Palestinian President Mahmoud Abbas is trying to rally 🌐international support to persuade Mr. Trump not to make the announcement.
His office said he made 📱phone calls on Sunday to world leaders including 🇫🇷French President Emmanuel Macron & 🇹🇷Turkish 👔President Recep Tayyip Erdoğan.
He wanted to “explain the dangers of any decision to move the [🇺🇸US] embassy to 🇮🇱Jerusalem🇵🇸 or recognise (🇮🇱Jerusalem🇵🇸) as 🇮🇱Israel’s capital”, Mr Abbas’s adviser Majdi al-Khalidi told the AFP news agency.

🇵🇸Palestinian leaders have previously warned the move would threaten a two-state solution. 🇮🇱Israel has occupied East 🇮🇱Jerusalem🇵🇸 since the 1967 Middle East war. It annexed the area in 1980 & sees it as its exclusive domain. Under international law, the area is considered to be occupied territory. 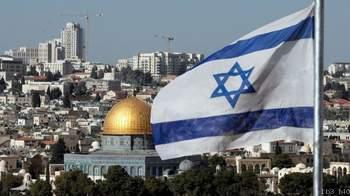