Saudi Arabia ramped up its campaign against Iran’s growing influence in the Arab World Sunday by persuading most of the 22 member states of the Arab League to condemn Iran’s Lebanese ally, Hezbollah, as a “terrorist organization.”
Arab foreign ministers gathered at the League’s headquarters in Cairo Sunday for an emergency meeting called by Saudi Arabia. Lebanon’s foreign minister, Gibran Bassil, did not attend, and the Lebanese representative at the meeting expressed reservations over the final communique.
Iraqi Foreign Minister Ibrahim Al-Jaafari also did not attend the meeting. Iran, along with the US-led international coalition, has been a major supporter of Baghdad in its war against ISIS.
“We want to hold everyone responsible,” Bahraini Foreign Minister Khalid bin Ahmed Al-Khalifa said during the deliberations.
“We want to hold countries where Hezbollah is a partner in government responsible, specifically Lebanon.” Al-Khalifa claimed that Lebanon “is subject to full control by this terrorist group.” 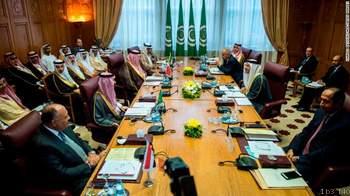