There was pandemonium and panic in Asaba, Delta State capital when daredevil armed robbers numbering over five attacked a bullion van around Koka junction along the Asaba-Benin Expressway and carted away a yet to be disclosed amount of cash, running into as much as several millions of naira.
According to an eyewitness account, the heavily armed hoodlums, who came in a grey Sienna car, were seen shooting sporadically before overpowering the security personnel serving as escort to the bullion van said to belong to United Bank for Africa, (UBA), and thereafter took possession of the van and emptied its vault and zoomed off to an unknown destination.
It was not however clear where the van was coming from and going to when the incident occurred.A middle-aged man who narrowly escaped the armed robbers’ bullets that left his car severely damaged, told our correspondent that “I want to thank God for saving my life.
Before the police could arrive the scene the robbers have zoomed off with their Sienna car with serious gunshots into the air. 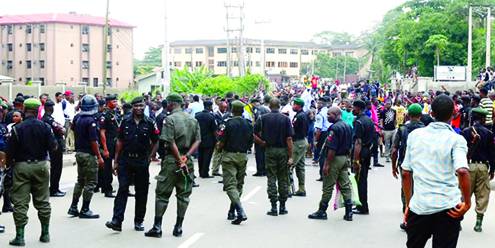