The Captcha test, which means the “Completely Automated Public Turing test to tell Computers and Humans Apart”, was developed in the late 1990s to prevent people from using automated bots to set up fake accounts on websites.
When logging into a website, users prove that they are human by solving visual puzzles, which requires identifying letters, digits, symbols or objects that have been distorted or animated in some way.
Since then, Captcha designers have made their tests more difficult to beat, but the researchers said in their new paper that the software was now able to pass Google’s reCaptcha test 66.6% of the time.
“We’re not seeing attacks on Captcha at the moment, but within three or four months, whatever the researchers have developed will become mainstream, so Captcha’s days are numbered,” Simon Edwards, a cyber-security architect for data cyber-security firm Trend Micro Europe, told the BBC.
Edwards said that typically within two months of security flaws being discovered, have-a-go hackers will start attacking every publicly-visible web server they can find, and so it is likely that Captcha tests on websites will soon be under siege. 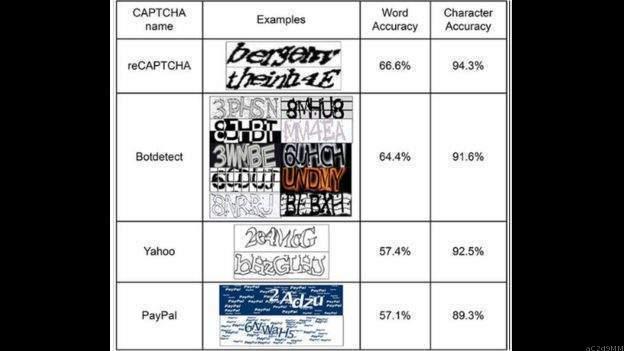