Having spent countless hours roaming the dunes, cities, settlements and tombs of Ubisoft Montreal’s take on Ancient Egypt, I’m struck by just how bipolar Assassin’s Creed Origins really is. It’s a game of two warring personalities.
One wants to try new things – hitbox-based combat! collectable gear! camel races! – while the other steadfastly grips the tropes you’ve experienced in every other AC title (and they very much are tropes now we’re 11 or more games and ten years into the series).
You’ll parkour over the scenery and climb incredibly detailed monuments; you’ll blow sleep darts and sneak through conveniently placed long gross; you’ll leap from ever implausible heights into even more conveniently placed stacks of hay.
UCJ, UNILORIN. 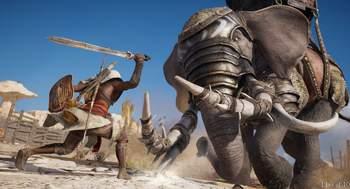