Endurance, astronaut Scott Kelly’s memoir (written with Margaret Lazarus Dean) of his record-setting year on the International Space Station (ISS) in 2015, offers Earthlings an informative and gripping look at both the adventures and day-by-day experiences of living in a metal container that is orbiting Earth at more than 28,000km/h.
Kelly brings our dreams crashing down to Earth, vividly reminding us of the many challenges – some mundane, others quite scary – of that cosmic frontier. It’s not all beautiful views of our planet and restful floats in zero-g.
There’s the burned-out lightbulbs, the mould and dust, the never-ending hum of equipment, the occasional flashes in your vision when a cosmic ray passes through your eyes, the lost bone mass, and the build-up of carbon dioxide when the scrubbers sporadically malfunction.
“If we are going to get to Mars,” Kelly writes, “we are going to need a much better way to deal with CO₂. Using our current finicky system, a Mars crew would be in significant danger,” and if “the toilet broke and we couldn’t fix it, we would be dead.”
He and his colleague, Russian cosmonaut Mikhail Kornienko, were human guinea pigs, hoping to learn the long-term effects of space isolation on mind and body. 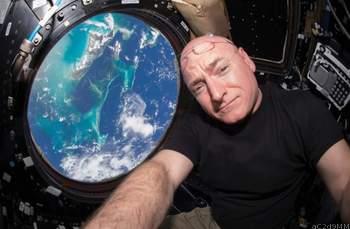