In a study published today in the journal Nature, the team discovered a star that exploded multiple times over a period of more than fifty years.
Their observations, which include data from Keck Observatory on Maunakea, Hawaii, are challenging existing theories on these cosmic catastrophes.
The study calculated that the star that exploded was at least 50 times more massive than the sun and probably much larger. Supernova iPTF14hls may have been the most massive stellar explosion ever seen.
The size of this explosion could be the reason that our conventional understanding of the death of stars failed to explain this event. Supernova iPTF14hls may be the first example of a “Pulsational Pair Instability Supernova.”
“According to this theory, it is possible that this was the result of star so massive and hot that it generated antimatter in its core,” said co-author Daniel Kasen, an associate professor in the Physics and Astronomy Departments at UC Berkeley and a scientist at Lawrence Berkeley Lab. “That would cause the star to go violently unstable, and undergo repeated bright eruptions over periods of years.”
That process may even repeat over decades before the star’s large final explosion and collapse to a black hole.
“These explosions were only expected to be seen in the early universe and should be extinct today. This is like finding a dinosaur still alive today. If you found one, you would question whether it truly was a dinosaur,” said Andy Howell, leader of the LCO supernova group and co-author of the study. 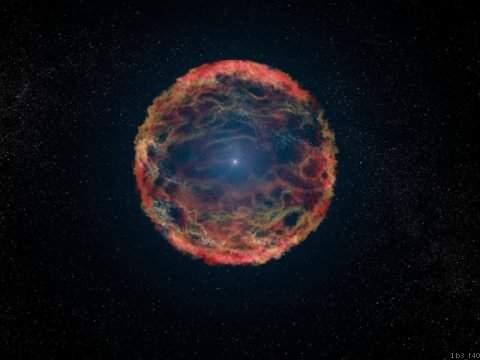