Skip to content
Asukuti has hinted UCJ Unilorin on his plans for students in the current administration as the Welfare Secretary.
According to him, he intends embarking on a project which he calls ‘a Queuing Pavillion,’ a project worth about Four Million Naira (N4,000,000).
He claimed the proposal in a written document and other processes cost him about Eighteen Thousand Naira. picture of the proposed pavillion taken by UCJ Unilorin correspondence
He reported that he intended seeking support from the Students’ Union for about One Million, Two Hundred Thousand Naira (N1.2m), and to also channel the remaining One Thousand, Two Hundred Naira (N1,200) of the sticker-fund got from Korope Union into this project and also solicit for funds personally to the best of his ability.
He added that, the intended or proposed Queuing Pavilion which ought to be established at the park contains about ten (10) queuing spaces which can contain about three thousand (3,000) to four thousand (4,000) people at a time. 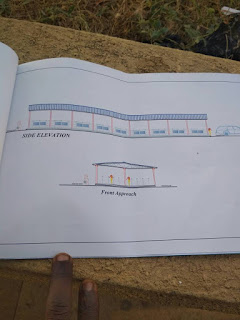 plan of the proposed pavilion
In his words, he reveals that, “Just to ease the pain of the students, I now said fine, let’s say we are having a hundred and ten (110) buses, if we multiply that number by a thousand and two hundred naira (N1,200), which is about a hundred and thirty-two thousand naira (N132,000). I then concluded that, I would rather do something student will benefit from.
This thing cost me nothing less than Eighteen Thousand Naira (N18,000). (He shows the press the proposal document of his intended project). You know no one will embark on a proposal free of charge, you need to give them money. If the Union is ready to give the welfare unit just (N1.2m), then I am ready to go the extramile of soliciting for funds…… Will I be a beneficiary of this project? No. But the students will be the one to benefit”.
Tags: Unilorin Dailies