Skip to content
In an interview with the Union of Campus Journalists, University of Ilorin, Com. Asukuti sheds more light on grey issues surrounding his suspension by the Student Union Senate Council.
“I have something to offer the students; I didn’t contest to be a Welfare Secretary to embezzle the people’s money. I will rather live a poor life than to be living a big life with public fund!”

These are the words of Asukuti, as he reveals more truths on the huge misconceptions about his dealings as the Welfare Secretary of the Students’ Union right from the inception of his current administration.
Lately, so many allegations ranging from embezzlement of funds, to misconducts and more have been levied against the Welfare Secretary of the Students’ Union. All these tend to stand as a threat to his image and personal integrity as a public figure.
However, Asukuti has reacted to in a series of interview with UCJ Unilorin.
In his words, he said, “Upon our resumption to office I told the President of the Students’ Union personally, that I will compete with him in  terms of achievements. I also said, if I compete with him, it would be a glory and a plus to our administration. And then he replied and said, fine”.
He asserted that certain underlying issues like poor accountability for years undermined his effective performance. “Upon this administration, there has been no record for the past five years for the money they are getting”. As the Welfare Secretary, he had to go the extra mile of changing the order of the manner of doing things he met in the office. “I said, last five years, no traceable account? I felt, why would a Union be doing like this, atleast we must be able to know what we realize from this people. That was when I say okay o, Chairman, why don’t we do something that will serve as an assistance, that is, something the students will benefit from your association. I said to the chairman, let me know the total number of vehicles that we have (i.e korope).” 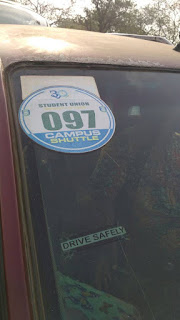 Asukuti claimed this idea actually helped his office and the Students’ Union at large. “Previously, they said fifty-four but now, I have seen a bus with the number one hundred and fourteen”. 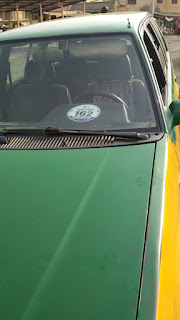 Asukuti further claimed he embarked on so many journeys during the course of the semester just to make sure the pressing needs (transportation) of the students are met especially on the transportation issues during the start off of the session.
He claimed he did not make use of the Union’s fund to undertake any of the journeys. Instead, he spent his personal money.
According to him, the main concerns were to make sure more vehicles especially the korope buses are not only brought on campus, but function efficiently and increase their number significantly in order to ease the pain of the students during the peak of the fuel crisis.
In his words: “Actually, I travelled together with the chairman, And I did not take a penny from the Students’ Union. With my personal money I went to Offa, Iwo, Osun. You will see some new korope, those were given to us by the Oba of Iwo. Then, we have some Honourables in Iwo who still send us some help. Though, it is not that they dash the Union, they are just using it to help us and then serving as their own business as they get established here in our University. Now, we have an increased number , among the vehicles you will see one yellow bus like this ….(presents photo shots, see image below), like this one now, they are yet to place sticker on it. That means they are increasing drastically. (Presents another photo) This is a new vehicle with number One Hundred and Ten. But do you know I cannot know the exact number of buses since they will not park at the same time. That means they have increased and I thank God.” 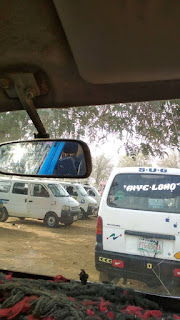 On the allegation regarding korope stickers, Asukuti did not deny the fact that initially, the Vehicle Identification Number (VIN) was his own idea. However, he claimed, he did not collect funds from the Students’ Union account for the stickers.
He said, “Out of the frequent complaints and calls from students on forgotten items, properties like phones, purses and many more in korope buses, I suggested to the korope chairman that we should come up with the VIN idea. This is because when you ask the students to identify the bus they boarded, they only say it was a colour- white bus and how many white buses do we have on the park?. I did not collect any penny from the Students’ Union account to do the sticker. Rather, I told them that all other neccessary stickers and things they normally collect, I will give them the sum of Three Hundred Naira (N300) out of the One Thousand and Five Hundred Naira (N1,500), including their I.D. cards. In doing such, I think I am even helping the Union by having savings other than waste public funds”. The Vehicle Identification number is stuck at top side of the wheelscreen of the buses as seen in the images posted. 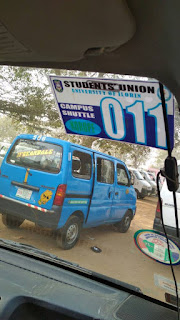 He strongly assured the students that he is not occupying the office of the Welfare to embezzle money. However, there has probably been some misunderstandings and discrepancies between the Students’ Union and his personality. “You see, I have something to offer the students. I didn’t contest to be a Welfare Secretary because I want to embezzle people’s money. I will rather live a poor life, than to be living a big life with public fund. One thing about my people is that they believe I do strong-head, that I don’t want to carry them along. But when I seek some people’s opinion, their opinion was that we should take the money and.. and I will rather not take it than to eat it.
However, the press hopes that more light is shed on this subject matter especially from the other members of the Students’ Union Executives.
Asukuti frankly speaks of being unfairly treated by the UISAPC. In his words, he expressed his displeasure at their approach in carrying out their various functions.
He said, “The UISAPC, they are not acting independent. They are acting as a dummy”. His bone of contention is on the fact that the UISAPC took some unjust steps which resulted into his suspension.
He reported that, “Why will the UISAPC send an allegation to the Senate Council without inviting me? They did not invite me  first and that is why I did not come for the first sitting. This is because I felt embarrassed that the UISAPC will just take some decisions without inviting the person involved for investigation if they are not clear. However, they took it to the Senate Council first, the Senate Council set up a committee, which invited me. I was invited by the UISAPC a day to my suspension. The Senate Committee who took over the investigation; they  did not even meet me for once. They now went to invite the Korope Chairman of the Multipurpose Cooperative, just to misinform the people and mislead congressmen. “Korope Chairman has never been invited.” They claimed someone anonymous that he should act as a member of the Korope. Why didn’t they ask the person to say his name that, ‘I, so so…so’. There were no names. But I know that only one of the audios I relate with is the Chairman of the Keke Students’ Union, but other people are not related. However, people outside will not see all these things. You see, when I am talking shock absorber, some people will say that ‘what are you saying? You want to eat Seventy Thousand Naira’…”
Asukuti stated that, “This thing they are doing to me is not new to me, sincerely, this will be the first ever defeat I have had. However, whatever the challenge is, of course my own belief is that whenever we are playing politics, let’s compete with achievements, not tarnishing or dirtying anybody’s image. Many meanings could be read from this assertion, nevertheless, Asukuti decided to focus on the way forward.
He briefly sheds more light on some of his recent challenges and of course facts to redeem his integrity.
In his words he said, ” I increased the number of korope on campus and the Students’ Affairs Unit of the shool was happy, the school management also. I know the amount it cost me to bring those MST on campus – It cost a lot (off the record). So, how much is Seventy Thousand Naira?… But how many students do I want to tell? If I had shared the money among the Students’ Union Executives or enjoyed my life with it; nemesis will still catch up with me”.
In conclusion, I want the Students to know that I brought in Soludero, I brought in about additional Fifty (50) korope on this campus. I increased the number from two to ten during the scarcity. They gave each korope stickers of the VINs till the 114th bus and there are still some number of koropes that are yet to get their VIN (as at the time of this report). I did all these without collecting a kobo from them. When I increased the number of Korope, nobody in the Union claimed that I didn’t take permission; When I brought in Soludero, nobody in the Union claimed that I didn’t take permission; When I extended their service from 4p.m. to 7p.m., nobody said why didn’t he take permission; Why is it now that it is when I gave people go ahead to the sticker that they are now asking for permission? Are we new to the sticker? It was used during the Eminent led administration.”