Former Vice President of Nigeria Atiku Abubakar has formally announced his defection to the Peoples Democratic Party (PDP). The former vice president announced this on Sunday afternoon in a live video broadcast on Facebook, less than two weeks after he left the ruling All Progressives Congress (APC).
“The key to creating job is a strong economy and that is why we are currently lacking,” he said. “So today, I want to let you know that I’m returning home to the PDP, as the issues that led me to leave it have now been resolved. “I joined the APC as I had hoped it would be the new force that would help improve life for our people and I was excited about the party’s manifesto to create three million new jobs a year. “The result has not been the change people had been promised or voted for as, in the last two years, almost three million Nigerians have lost their jobs.”
Explaining why he left the APC in November, he accused the party of failing to spearhead the rebirth of a new Nigeria as promised among other reasons. 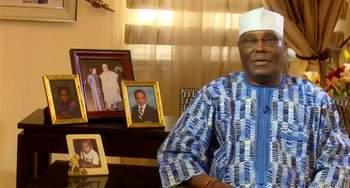