Australians have overwhelmingly voted in favour of legalising same-sex marriage in a historic poll. The non-binding postal vote showed 61.6% of people favour allowing same-sex couples to wed, the Australian Bureau of Statistics said.
Jubilant supporters have been celebrating in public spaces, waving rainbow flags and singing and dancing.
The issue only went to a voluntary postal vote after a long and bitter debate about changing the law. Prime Minister Malcolm Turnbull said his government would now aim to pass legislation in parliament by Christmas.
“[Australians] have spoken in their millions and they have voted overwhelmingly yes for marriage equality,” Mr Turnbull said after the result was announced.
“They voted yes for fairness, yes for commitment, yes for love.” More than 12.7 million people – about 79.5% of eligible voters – took part in the eight-week poll, which asked one question: “Should the marriage law should be changed to allow same-sex couples to marry?” 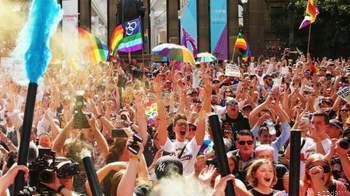