The British artist Banksy has organised a “street party” in the occupied West Bank to apologise for the Balfour Declaration, ahead of its centenary.
An actor dressed as Queen Elizabeth II hosted dozens of children at the event.
She also unveiled a new work by Banksy etched into Israel’s controversial West Bank barrier that said: “Er… Sorry.”
The Balfour Declaration expressed the British government’s support for a Jewish national home in Palestine, paving the way for Israel’s creation.
Israel and Jewish communities view the pledge as momentous, while Palestinians regard it as an historical injustice.
The British government has said it will mark the anniversary “with pride” and will host at a formal dinner in London on Thursday that will be attended by Prime Minister Theresa May and her Israeli counterpart, Benjamin Netanyahu.
It said the government viewed “with favour the establishment in Palestine of a national home for the Jewish people”, so long as it did not “prejudice the civil and religious rights of existing non-Jewish communities”. 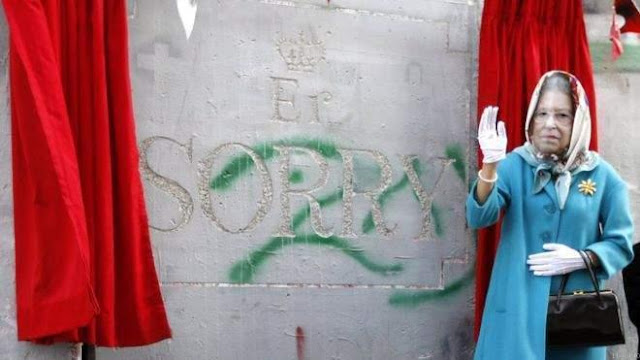