Singer, Bankole Wellington, popularly known as Banky W, is full of gratitude to God for seeing him through a health challenge.
He took to social media where he explained in a lengthy post that he had been away for some time because he was undergoing surgery for a “rare strain of skin cancer tumours” on his shoulder.
Mr W also revealed that the surgery which was carried out in October was the third since over 10 years ago. “For those who’ve been wondering why I’ve been away so long..I had my 3rd surgery on a rare strain of skin cancer tumours in my shoulder last month. The first 2 times were over 10 yrs ago, then it recently resurfaced.”
The entertainer, however, said he was only sharing his story to serve as an encouragement to others who may be struggling with the same fate. He therefore, asked that fans should avoid sending messages of sympathy or worry. 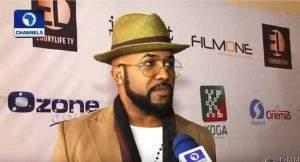