The Unilorin spelling championship has held at the University auditorium, with the presence of the renowned Big Brother Naija star and Ex-Unilorite, Omololu.
The Sub Dean of the Student Affairs unit, Alex Akamu, in his speech expressed his pride in the student’s show of responsibility and hardwork, he expressed his belief in Unilorites to keep making the school proud, emphasizing the need to be dilligent and of good behaviour.
The Student Union President. Reedof, encouraged the students to work hard, stressing that youth are the future of the country and they have to work hard towards attaining it, he expressed his confidence in the Students being impactful and of great importance.
Bolaji Abdulfatai Sulayman, the DVC Management Services, a predicate organisers of the championship kudos for the great innovation, he explained the importance of the Spelling Championship and of the act of spelling itself.
The Anchor made clear the rules of the championship and the stages involved also mentioning the five faculties that made it to the finals, Faculty of Arts.
The contest commenced after his departure, the competition was also held for the physically challenged, the students displayed brilliance and composure during the contest. The Faculty of Basic Medical Sciences emerged the Champions of the contest while Faculty of Law, Arts and Engineering came 2nd, 3rd and 4th respectively. Also present to grace the event were the University Vice Chancellor Sulayman Age Abdulkareem who was represented by Bolaji Abdulfatai Sulayman, the Deputy Vice Chancellor, Management Services, The Dean of Student Affairs represented by the Sub Dean, Alex Akamu and the Student Union President, Adebisi Ridwan under whose leadership the championship was put in place. 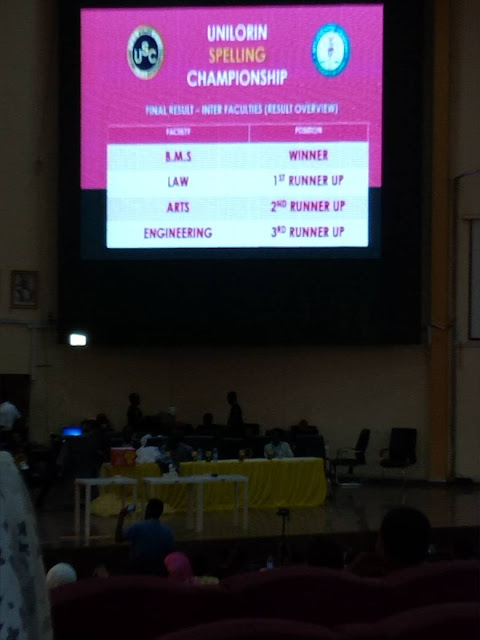