Admission of International students is out – Reedof

The Student Union President university of Ilorin, has stated that, ban on hostel construction by the Federal Government is responsible for accommodation problems on campus.
In a chat at the “Beyond the veil,” a program organised by the 7the Sense Concept, Com. Reedof stated the following:
The reason for inadequate accommodation for students is the ban on hostel construction, put in place by the Federal Government.

Unavailability of kerosene in depot is because the NNPC does have kerosene.

Damages in hostels have been seen to.
The delay in the distribution of souvenir is because, the SC made a resolution that the contractor and the CEC 2016/17 academic session be summoned. The souvenir will be distributed once the controversy has been resolved.

The ban on the use of gas in school hostel although not explicitly stated, is a conventional law and the rationale behind this is the safety of students.

It was alleged that none of the CEC members resides on campus. In response to this, the president stated that the AGS and V.P COHS reside on campus. The most important is the communication of information, he added. “I also use my school media handle to generate the perspective of students on various matters… I’m trying to know the perspective of students to the proposed date of exam which is February 19,” he said.

The issue of inconsistency in dress code rules was also addressed, by the Union president; A difference in the opinion of the personnel in charge is the main cause of this inconsistency. “Every society has its dignity to protect; the rationale behind the dress code is to protect the image of the school. The way you dress is the way you will be addressed,” Reedof said.

Com. MYT, SU PRO, reported that, students can always walk down to the Student Union building and lodge your complaint. He promised that, an APP aimed at enhancing students’ academic growth and publicity will be launched.
Sen. Ademola Kunbi addressed the issue of price control on commodities sold on campus. According to him, the price control committee will meet with stakeholders and the regulated price shall be released. “When this is done, violators will be punished” he added.
The SU President expressed his displeasure at the suspension of members of his council, Com. Kunbi, maintained that the suspension of the welfare secretary is constitutional and relying on Article two of the Student Union Constitution, the CEC are responsible both jointly and individually, and as such, they are expected to stand in the gap for the welfare secretary until the expiration of his suspension.
A student suggested that a long time goal be implemented in solving the transport issue on campus, he advised that students be tasked to pay certain amounts yearly.
As regards the issue of security in school, the General Secretary, Com. Providence made it known that there is shortage of personnel and the Chief Security Officer has promised that there will be recruitment soon.
Students with disabilities are given privileges at park; they have representatives who facilitate hostel allocation for them, he added.
MYT blamed the poor information dissemination on the inefficiency of social media platforms. “We have meetings with the PRO of various faculties, and to a large extent, we record nothing less than  80% of the PRO in attendance and as  image makers of the union, all information reach them before its broadcast. I hold it on such PRO who did not disseminate the information, he said.”
On dormancy of the students viewing center at the SUB, the sports secretary promises to see to it in conjunction with the welfare secretary.
Issues discussed at the programme include: transportation, security, inconsistency in dress code rules, grassroots relationship with students, the role of the judiciary, price control, accommodation, souvenir, among others.
The officials made it known that the most effective way the union communicates her grievance to the school management is dialogue. 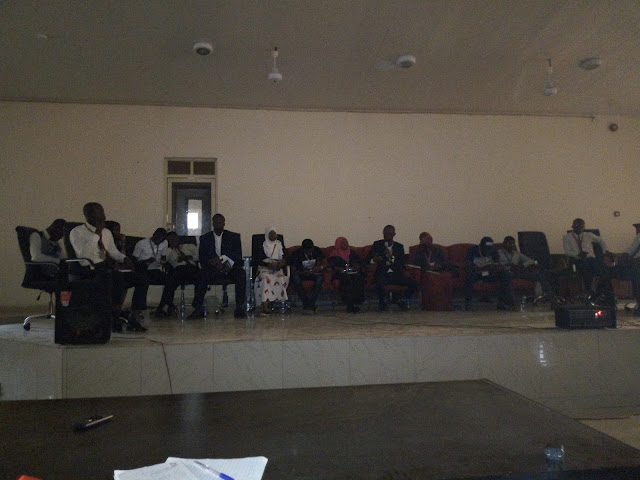