The mysteries of the pyramids have deepened with the discovery of what appears to be a giant void within the Khufu (or Cheops) monument in Egypt.
It is not known why the cavity exists or indeed if it holds anything of value because it is not obviously accessible.
Japanese and French scientists made the announcement after two years of study at the famous pyramid complex.
They have been using a technique called muography, which can sense density changes inside large rock structures.
The Great Pyramid, or Khufu’s Pyramid, was constructed during the reign of Pharaoh Khufu between 2509 and 2483 BC. At 140m (460 feet) in height, it is the largest of the Egyptian pyramids located at Giza on the outskirts of Cairo. 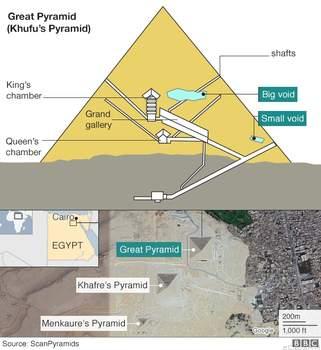