The future of the British Antarctic Survey at the south pole is in doubt after scientists were forced to abandon their research station for the second time after cracks lengthened in the ice sheet.
The renowned Halley VI ice base, from which the hole in the ozone layer was first detected, has already been relocated 14 miles across the Brunt Ice Shelf because of an encroaching fissure in the ice.
But another fracture in the floating ice shelf – dubbed the Halloween Crack – has been steadily growing to the north of the base since last year. Crews were evacuated earlier this year, and today the BAS announced that, for safety reasons it will be closing its research station – Halley VIa – for the Antarctic winter, which runs between March and November.
Although the BAS says nobody is immediate danger, they cannot be sure that conditions would not worsen during the difficult conditions of the southern polar winter when an evacuation would be impossible. 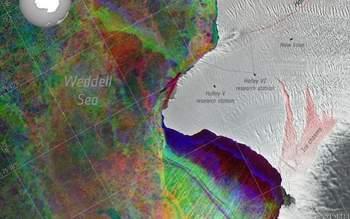