President Muhammadu Buhari ordered that ailing former Vice President Alex Ekwueme be flown abroad for medical treatment.
According to a statement by his Senior Special Assistant on Media and Publicity, Garba Shehu, the President gave the order after he received a brief on the medical condition of the former Vice President.
Shehu explained that the approval given by Buhari would cover the cost of chartering an air ambulance for the journey and the cost of his treatment.
The statement read, “President Muhammadu Buhari has approved the immediate medical treatment of former Vice-President, Dr Alex Ekwueme, outside the country.
“The approval followed a brief the President received Friday on the medical condition of the former Vice-President. “The approval covers the immediate charter of an Air Ambulance for the emergency movement and the cost of treatment.
UCJ, UNILORIN. 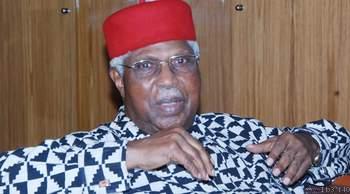