An Elder Statesman, Professor Ben Nwabueze faulted President Muhammadu Buhari for what he describes as his failure to mobilise Nigerians in the pursuit of unity, after over two years of assuming duties as the nation’s Commander-in-Chief.
The Professor of Law, who also served as a former Minister for Education in the third republic of Shonekan’s Presidency, claimed Mr. Buhari had rather remained resolute in his word that Nigeria’s unity was non-negotiable.
“Nothing has been done, except to talk about unity not being negotiable. So that is the object, and that is why I consider that restructuring is an absolute and compelling necessity,” he said. 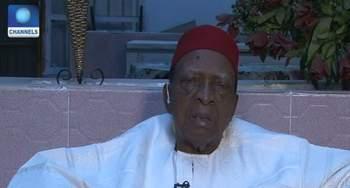