Chapecoense secured a place in the preliminary rounds of the 2018 Copa Libertadores on Sunday, sparking scenes of jubilation at the end of an arduous year for the tragedy-hit club.
Chape were forced into a complete rebuild after the plane carrying their squad, coach and directors, as well as a selection of journalists, to Medellin for the first leg of the 2016 Copa Sudamericana final against Atletico Nacional crashed, with 71 people losing their lives.
Five days on from the anniversary of the catastrophe, the club remarkably booked their place in next year’s Libertadores in dramatic fashion as Tulio de Melo’s 95th-minute strike completed a come-from-behind 2-1 victory over Coritiba.
The result ensured Chape finished eighth, which proved sufficient to earn them chance to qualify for the group stages of South America’s premier club competition as Gremio and Cruzeiro, who finished in the top six, had already qualified by winning the Libertadores and Copa do Brasil respectively.
The three players to survive the crash, Neto, Jackson Follmann and Alan Ruschel, who was an unused substitute at Arena Conda, celebrated the achievement in front of ecstatic fans by driving a medical buggy around the pitch. 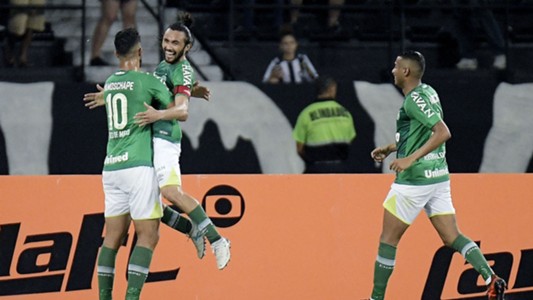