On Wednesday morning he was China’s Hugo Chávez, testing his comrades’ eyelids – and their bladders – with a three-and-a-half hour, a 65-page sermon in which he outlined his brave new vision for the Communist party, and the world.
“The Chinese dream is a dream about history, the present and the future,” Xi declared towards the end of his unexpectedly long-winded address to the opening of China’s 19th party congress. By the conclusion of this eastern answer to Aló Presidente! more than a few of Xi’s audience appeared to have entered a dreamlike state.
Over the next 203 minutes Xi waxed lyrical on a miscellany of themes, from housing to Hong Kong independence; soil erosion to the South China Sea; rural poverty to the great rejuvenation of the Chinese nation; cyber-security to corruption; Marxism to military modernisation; global governance to global warming.
However, as delegates streamed out of Xi’s far-reaching declamation there was nothing but admiration for the thoughts of a man increasingly seen as China’s most powerful – and feared – leader since Mao. “It wasn’t long, it wasn’t long – it was absolutely wonderful,” beamed Wang Wenxia, a teacher from Hebei province, one of the 2,280 Communist party delegates attending this year’s congress. 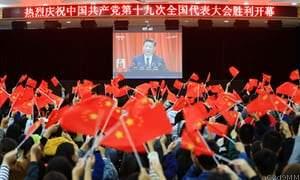