Chinese social media users are debating the practice in one city of publicly sentencing death row inmates and parading them in the lead-up to their deaths.
Lufeng, a city in southern Guangdong province, is increasingly publicising criminal verdicts, in what appears to be a bid to stamp out its reputation as a hotbed for synthetic drug production.
Popular news website The Paper says that following their verdicts and with the approval of the court, the 10 who were given death sentences for drug offences “were escorted immediately to the place of execution and terminated”.
The city of Lufeng made international headlines in June when two courts in the region publicly announced the sentences of 18 people, including eight people it said were executed immediately after their trial.
In March, the China National Narcotics Control Commission told media that China’s seizure of synthetic drugs including methamphetamine and ketamine has “surged by 106 per cent year on year in 2016”. 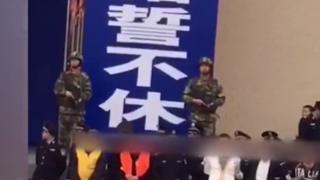