Scientists have seen the first alien object flying through own our solar system. The strange, long, red rock has been wandering between the Milky Way for hundreds of million years, failing to become attached to any star system.
It then flew through our own, letting scientists have a look at the first alien, interstellar object they’ve ever seen.
“For decades we’ve theorized that such interstellar objects are out there, and now – for the first time – we have direct evidence they exist,” said Thomas Zurbuchen, associate administrator for NASA’s Science Mission Directorate in Washington. “This history-making discovery is opening a new window to study formation of solar systems beyond our own.”
Moving at 95,000 kilometres per hour (59,030 mph), Oumuamua was at first thought to have travelled from the bright star Vega, 25 light years away in the northern constellation of Lyra.
The asteroid’s properties suggest it could have a high metal content and lacks significant amounts of water or ice. Its surface has been darkened and reddened by the impact of cosmic rays over millions of years. 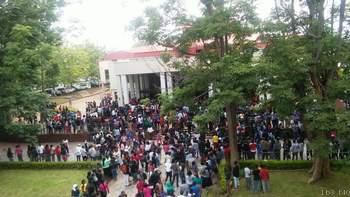