~~~   Ukor Jonathan
Sequel to the trending IGP’s, Ibrahim Idris, video footage which shows him stammering in an attempt to read out his own speech, someone was inspired to write rather than to just be amused. The speech was read on Monday to commission the Police Technical Intelligence unit in Kano state. Where many had made jokes and savagery remarks regarding this, a Poet, Ukor Jonathan (aka Jon Ukor, aka Liberty) pens his thoughts in this poetic piece titled “CONFUSION TRANSMISSION”.
The poem is a 5-stanza literary work with each stanza having 6 lines (non-metrical), except the fourth stanza which is metrical. He writes of the paradox of living in Nigeria, the pretense of both the rulers and the ruled, and the culpability of all and sundry. As a closing remark, he admonishes the citizenry, from the upper class to those under bridges to “First remove the moth in thine eye /Then inform countrymen of the beam in theirs”.
He hopes to achieve not just the so-called restructuring of the nation but for the restructuring of the Nigerian minds and for a clearer mindset of future generations:
CONFUSION TRANSMISSION
By Ukor Jonathan
We live in a paradoxical world
As the wealthy take from the poor
The poor deceive the ignorant
The ignorant believe in their folly
The fools take pride in their foolishness
Until it gets to the third person
We breathe an air of pretense
A cordiality that chokes our windpipes
Intimacy of lust and fake love
Religion of mere spirituality
Free salvation now up for auction
Still we blame the third person
We laugh at our child’s innocence
“how charming”, we would say
Yet slander the other man’s child
A tyre round his neck before saying Jack Robinson
Pronounce him guilty before a trial
“People are wicked”, we yet say
It’s an apprehensive transition
I mean… this trending transmission…
Which already has an effect on the Nigeria nation
A sheer confusion on our generation
Poor educational system, dwindling living condition
Not forgetting the worldwide renowned Greencard humiliation
We are all culpable
So don’t blame the third person
First remove the moth in thine eye
Then inform countrymen of the beam in theirs
Before we are blinded by this confusion
Before it is transmitted to another blind generation
©Jon Ukor
Ukor Jonathan is a 400L student of the Department of Linguistics and Nigerian Languages, University of Ilorin. He has been writing poem as far back as 2011. Most of his works can be assessed on his WordPress account:
www.everythoughtweb.wordpress.com. His personal favorites are: The Goodness of Bad People, Grief, Vintage Lies, Its a Sunday in Nigeria, Tabula Rasa, Brothers Meet Friends, among others. 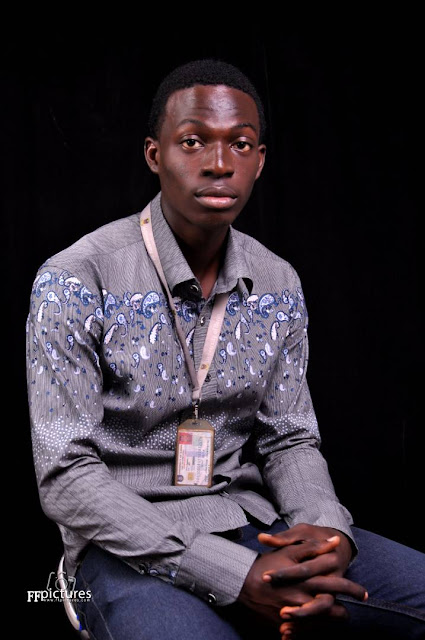