In football, controversy usually surrounds the referee rather than the shirts the players are wearing. Not this week in Spain.

The Spanish national team released a kit for next year’s World Cup but it proved extremely divisive among the country’s fans.
Critics say the colours of the shirt appear similar to the flag of Spain’s Second Republic, rather than the current Spanish national flag. The Second Republic started in 1931 when the King was overthrown and lasted just until 1939.
The flag can evoke painful memories for those whose family members suffered during the civil war, which occurred between 1936 and 1939. The conflict was won by the nationalists and led to Francisco Franco becoming the dictator of Spain.
He was in power until his death in 1975. But the Spanish football federation and designers Adidas deny the kit has political connotations.
The row comes at a time of growing political divisions in Spain. 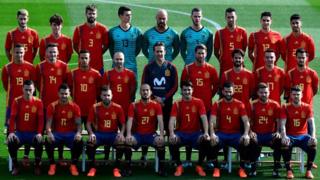