Cristiano Ronaldo has taken to Instagram to announce the latest addition to his family.
The Real Madrid superstar has posted a photo of himself, girlfriend Georgina Rodriguez and his son Cristiano Jr., along with his newborn daughter Alana Martina.
It has been a busy six months for the family as they previously announced this past summer the arrival of twins, a boy and girl named Mateo and Eva, via a surrogate.
Ronaldo missed the birth of the twins while away on international duty with Portugal for the Confederations Cup, but there were no such conflicts this time around as he was rested for Portugal’s November friendlies against Saudi Arabia and the United States.
Alana Martina, who the star announced the name of a few weeks ago, is Ronaldo’s second daughter and fourth child. 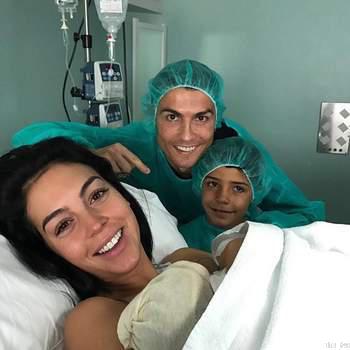