The Cultural Security Forum (CSF), University of Ilorin chapter, has held her cultural summit on June 30, 2018.
The program saw a remarkable distinguished guests graced the occasion, while the Honouree, HRM Oba Abdul-Rasheed Olabunmi Ayotunde, other special guests in attendance were equally welcomed.
Mrs. K.W Salee, Staff Adviser of the cultural security forum, in her opening remark, welcomed and expressed her joy at the arrival of the Honouree of this august occasion and the Collegiate President of CSF, Adedimeji Adnan started the occasion properly and officially. The theme of the lecture tagged: “The role of the Nigerian youths in promoting national development and cultural values.”
Professor Ayo Akinwale in his lecture, shared his experiences and making references to his youthful age.
“The youths of a Nation are the future of that Nation and culture is the totality of life and undisputably regarded as a way of people for a particular period of time. Equally, culture is to be learnt from one generation to another and people are changing as to the Society changes, he emphasized,” he said.
He stated that no Nation would be happy to invest in some lazy youths and called the youths to educate their minds and soul and being a creativity is the key at the youth level. “Wake up and never remain dreaming, stand up and think how those dreams you had had would come to reality,” he said.
HRM Oba Abdul-Rasheed Olabunmi Ayotunde, commended the guest speaker and added that the youths should inculcate the habit to live a virtuous life on campus because it would paved way for them to live same after the completion of their various degrees, and besides, the youths who are not proud of their culture has lost in life, he said.

Eventually the Attorney General of the Students’ Union represented, Mr Abdul basit Mustapha, inuagurated the newly elected executives led by Adekanye walliyullah, 300level combined law student as they all sworn and took the pledge to serve the forum with doggednes.
Presentation of awards to the guest speaker and the honouree for their effort towards the actualisation of the programme, was done by the Sub Dean, Student Affairs. 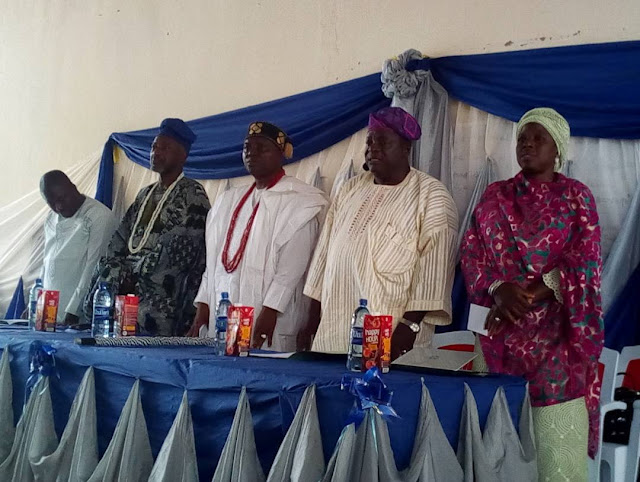