Former US President Barack Obama met with the Dalai Lama in India, where they discussed “compassion and altruism,” according to a representative from the Tibetan spiritual leader’s office.
The Dalai Lama said the meeting with Obama was “very good, I think we are really two old trusted friend(s),” according to a report from the India-based Central Tibetan Administration, which is essentially a government in exile.
Kasur Tempa Tsering, a representative from the Dalai Lama’s office, told the administration’s Department of Information and International Relations that the 45-minute meeting included a discussion about “promoting peace in today’s world torn by strife and violence.”
“To Obama, His Holiness said, ‘You are not only a former US president but you are a Nobel laureate, you are young and you can do a lot. We should fulfill our aspiration for world peace. Maybe my generation will not see the results, but your generation will definitely see the results,” Kasur Tempa Tsering said, according to the report.
While Obama’s meetings as president with the Dalai Lama angered the Chinese, the US under his administration did not support an independent Tibet or consider the Dalai Lama a head of state. 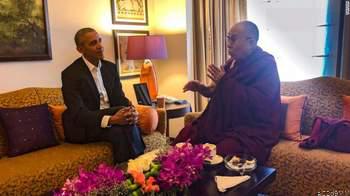