espnfc.com.ng
The ESPN FC panel engage in a heated debate about whether 2017 belonged to Cristiano Ronaldo, Mohamed Salah or Harry Kane.

Craig Burley responds to ESPN FC’s Mark Ogden’s assessment of Kevin De Bruyne, which compares him to the likes of Vieira, Keane and Gerrard.
Jose Mourinho spent years positioning himself as the opposite of Arsene Wenger, the serial trophy winner against the supposed “specialist in failure.” Not recently: if the Frenchman had a reputation as football’s leading economist, the Portuguese has appeared intent on securing that for himself.
Manchester City’s spending became a focus for a suddenly fiscally conscious Manchester United manager. Then Liverpool’s did when Jurgen Klopp made Virgil van Dijk the most expensive centre-back in footballing history. Mourinho may be sat watching City against Liverpool on Sunday, calculator ready to add up the sums.
And if so, some of the sums could appear inconvenient. City got Kevin De Bruyne for an initial £54.5 million, Liverpool Mohamed Salah for £36m. In the current, inflated market, each ranks as a bargain. De Bruyne remains City’s biggest buy and was the second costliest in English football, after United’s purchase of Angel Di Maria, when he joined in 2015.
Salah has already lost his title as Liverpool’s record signing to Van Dijk though, and even if the Dutchman had not joined, Naby Keita would have taken that mantle from him when that move officially goes through.

As it is, their combined cost only just exceeds United’s £89m outlay for Paul Pogba. The comparison is obviously inexact — different players, different roles, different clubs, different transfer windows — and imperfect: but for injury, Pogba, who started the season superbly, would presumably have had a far greater impact.
Instead, De Bruyne and Salah’s recent achievements outstrip his. There are other figures for Mourinho to consider in his numbers game: De Bruyne’s six goals and nine assists in the Premier League and Salah’s 17 goals and five assists; only two players have ever been directly involved in more than his 22 goals in their first 21 games in the division. The Belgian is the joint leader in the assist charts (tied with teammate Leroy Sane), the Egyptian, second only to Harry Kane in the scoring stakes.
Together, they are the frontrunners for the Footballer of the Year award: it is a decision that may force voters to choose between Salah’s individual impact and De Bruyne’s role as the finest player in the best team. 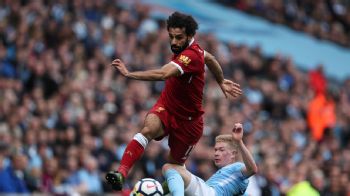 Mohamed Salah and Kevin De Bruyne have taken the Premier League by storm in their the second go around.
Recognition has already come their way. The Liverpool winger is the newly-anointed African Footballer of the Year. The City midfielder was named the best player on the planet in the ESPN FC 100. Pep Guardiola has deflected talk of De Bruyne being the finest in the world by invoking Lionel Messi but said in September that: “Kevin is one of the best players I have ever seen in my life.”
Consistent performers have excelled on major stages. The City man has endorsed his credentials with goals against Chelsea, Arsenal and Tottenham and two assists against Liverpool. His Anfield counterpart has scored home and away against Arsenal as well as finding the net against Tottenham and Chelsea.
And Chelsea, more than most, can count the cost of their excellence. De Bruyne was sold for £18m, Salah for £15m. They seemed fine prices for reserves who only started two and six league games for the club respectively. They looked less astute pieces of business when they returned to England for a combined £90.5m. They seem still less so when Philippe Coutinho’s £142m fee has reframed others’ values.
They are two of the three who got away from Stamford Bridge in Mourinho’s reign; the third, Romelu Lukaku, has now been reunited with the Portuguese at United. The two Belgians were particularly impatient to get first-team football. Klopp, who feels Salah is physically stronger now, has said the Egyptian was a “kid” at Chelsea and has exonerated the London club.
Yet that feels generous. Salah arrived at Stamford Bridge as De Bruyne left for Wolfsburg but they can tell a similar tale. Mourinho’s pecking order was set in stone. It reflected the primacy of Eden Hazard as the creator in chief, but also his preference for the prosaic talents of Willian and Oscar, tacklers who brought positional discipline to the final third.
It also highlighted an institutionalised short-termism. De Bruyne is 26 now, Salah 25. They are at their peak. If they have improved further and faster than expected and if neither represented the finished article in his Chelsea days, there should have been signs that such energetic performers had the capacity and determination to improve.
That improvement came elsewhere, in the Bundesliga and Serie A, and was accelerated upon their return to England. Now Salah is the Premier League’s most potent winger, prompting comparisons to Arjen Robben; defenders know he will cut infield on to his left foot and shoot, but still seem unable to stop him from doing it. Now De Bruyne may be the closest thing in England to the player Steven Gerrard was, with his passing and crossing range and long-range shooting.
Mourinho benefited from Robben’s brilliance at Chelsea; he wanted to add Gerrard’s dynamism to that side, too. Perhaps a manager who regrets United’s business before he arrived will calculate that United paid a similar amount for the misfits Morgan Schneiderlin and Memphis Depay as De Bruyne cost City in 2015. Perhaps one with a new-found interest in the numbers will pretend not to notice Salah only cost £4.5m more than he paid for Victor Lindelof last summer.