A dinosaur from China sported a “bandit mask” pattern in the feathers on its face, scientists have said.
Researchers came to their conclusion after studying three well-preserved fossil specimens of the extinct creature, called _Sinosauropteryx.
They were able to discern the dinosaur’s colour patterns, showing that it had a banded tail and “counter-shading” – where animals are dark on top and lighter on their underside.
The bandit mask pattern is seen in numerous animals today, from mammals – such as racoons and badgers – to birds, such as the nuthatch.
“This is the first time it’s been seen in a dinosaur and, to my knowledge, any extinct animal that shows colour bands,” co-author Fiann Smithwick, from Bristol University, told BBC News.
“In raccoons and badgers, it’s an advertisement of the fact that they’re aggressive,” said Dr Smithwick, adding: “If you’re a predator and you mess with them, they’re going to fight back.” 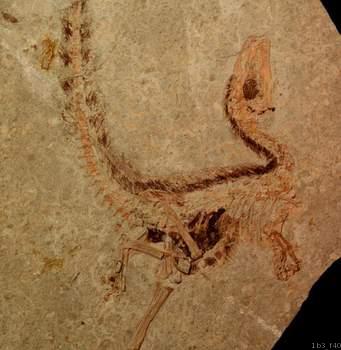 What do you think?
Love0
Sad0
Happy0
Sleepy0
Angry0
Dead0
Wink0
Previous Article Ozil: I give everything on the pitch for Arsenal
Next Article White Farmers Receive Jail Terms For Forcing Black Into A Coffin
59 Comments 59 Comments