A dram of vintage Scotch bought by a Chinese millionaire in a Swiss hotel bar for £7,600 was a fake, laboratory tests have concluded.
Analysts from Scotland were called in by the Waldhaus Am See hotel in St Moritz after experts questioned the authenticity of the 2cl shot.
It had been poured from an unopened bottle labelled as an 1878 Macallan single malt. It is believed to be the largest sum ever paid for a poured dram of Scotch.
Zhang Wei, 36, from Beijing – one of China’s highest-earning online writers – had paid just under 10,000 Swiss francs (£7,600, $10,050) for the single shot while visiting the hotel’s Devil’s Place whisky bar in July.
But suspicions about the spirit’s provenance surfaced soon after the purchase when whisky industry experts spotted discrepancies in the bottle’s cork and label from newspaper articles.
Carbon dating tests were then carried out by researchers from the University of Oxford, which suggested a 95% probability that the spirit was created between 1970 and 1972.
Further lab tests by Fife-based alcohol analysts Tatlock and Thomson indicated that it was probably a blended Scotch, comprising 60% malt and 40% grain – ruling it out as a single malt. RW101 said the tests had shown that the bottle was “almost worthless as a collector’s item”.
Had the bottle been genuine, it would have carried a bar-value of about 300,000 Swiss francs (£227,000). 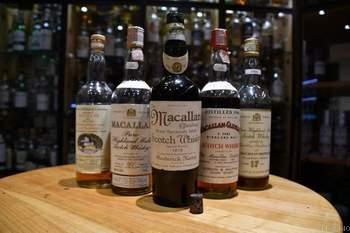