To begin with.  A Drug is any substance that alters the physical, mental, and overall medical state of the user. Least of the abusers nowadays find solace in these  illicit substances,whilst some abuse these drugs for recreational purposes. On the other hand, some are of the opinion that if you don’t get high on a regular basis it makes you “socially awkward”.
My point is ingesting these drugs might kill you instantly or worse, kills you slowly, rendering you an handicap either physically or mentally to which death will be the final resort.
The following are the drugs available over the counter and or in the neighbourhood that are being regularly abused:
1.Tramadol/T.M,Boko Haram,Tramore.
2.Rohypnol,Ref, Roachil, Epa. Forget me drug.
3.Codeine, lean, purple drank.
4.Marijuana,Igbo,kush,Ganja,Greens.
5.Crack,loud,Bonzai.
6.cigarette, cancerette, deathstick, cigar.
7.Hookah, Shisha.
8.Promethazine.
9. Phencyclidine,PCP, Angel dust, Horse tranquiliser.
10.alcohol.
This article will focus on ‘how not to abuse the drugs’, the adverse effects, and how to overcome the addiction.

TRAMADOL
Tramadol is classified as a schedule 4 (prescribed only) in Nigeria, Tramadol is used primarily to treatment of mild–severe pain, both acute and chronic.
Its analgesic effects takes about one hour to come into effect and 2 to 4 hours to peak after oral administration with an immediate-release. It has about one tenth the potency of morphine and is practically for pain moderation where in severity. Its effectiveness is equivalent to that of codeine. Also works as effervescent tablets and powders for mixing with water, capsules.
The Common side effects include: Constipation, itchiness and
nausea. Loss of appetite.
Serious side effects may include seizures, decreased alertness, and addiction. Permanent  kidney and liver damage, risk of committing  suicide.
While this drug is not recommended in women who are breastfeeding , those who take a single dose should not generally stop breastfeeding.
Note: Tramadol is highly habit forming, which its withdrawal syndrome sets in upon sudden stop in the consumption of the said drug. The Psychiatric symptoms may include hallucinations, paranoia, extreme anxiety, panic attacks. In other words one has to stop gradually by reducing the dosage of the drug intake.
Most importantly, overdose on these substances might result into: depression,Addiction, or death.
On the final note Tramadol may take up to 5-7 days in your blood stream.

Rohypnol
Rohypnol is an intermediate-acting pshyco active  drug with general properties similar to those of Valium and xanax. It is used in the short-term treatment of insomnia, as a pre-medication in surgical procedures and for inducing anaesthesia.
This drug is commonly called ‘ forget me drug’ because users of  this said drug have been reported to have gaps in their memory when under the influence of this drug,(partial amnesia).This effect is particularly dangerous when rohypnol is used to aid in the commission of sexual assault; victims may not be able to clearly recall the assault, the assailant, or the events surrounding the assault.
Primary abuser of this drug often consume it orally by chewing. It may also be abused by crushing and snorting the powder,or crushing and mixing it with marijuana to smoke, also it can be mixed with alcohol.
Importantly, these aforementioned ways are the most fatal ways of consuming this drug, because it simultaneously  releases a very high dosage of renin in the central nervous system which might lead to seizure, respiratory depression, and can also knock you out. If you stay out long enough, permanent brain damage might ensue or death.The only safer way of consuming  this drug is swallowing the whole pill. This way the substance will be released into the nervous system  gradually.
The Common side effects include : drowsiness, dizziness, loss of motor control, lack of coordination, slurred speech, confusion, and gastrointestinal disturbances.
Serious side effects include : respiratory depression, seizure, liver damage, short term memory loss, Brain damage, and AMNESIA in rare conditions.
Chronic use of Rohypnol can result in physical dependence and the appearance of a withdrawal syndrome when the drug is discontinued. Rophypnol impairs cognitive and psychomotor functions affecting reaction time and driving skill. The use of this drug in combination with alcohol is a particular concern as both central nervous system depressants potentiate each other’s toxicity. Also, the mixture of Rohypnol with marijuana creates a much volatile substance which is capable of impairing the user’s mind permanently.
Injection of any illegal drug puts the user at risk of contracting HIV (human immunodeficiency virus), hepatitis B and C, and other blood-borne illnesses.

Codeine
Codeine also known as lean, purple drank, syrup. Is an opiate used to treat pain , as a cough medicine , and
for diarrhea .It is typically used to treat mild to moderate degrees of pain. Greater benefit may occur when combined with paracetamol or ibuprofen.
It’s generally taken by mouth. It typically starts working after half an hour with maximum effect at two hours. Abusers of this drug often consume it orally, my opinion on this is that if you ever want to sip lean, do not take this drug in it’s raw form, try mixing it either, sprite, or monster.
Adverse side effect include:drowsiness and constipation. Less common are itching , nausea, vomiting , dry mouth , miosis, orthostatic hypotension, urinary retention, dry throat.
Chronic side effects include : asphyxiation, seizure , acute pancreatitis , and respiratory depression . diminished libido, apathy, and memory loss.
As with all opiates, chronic use of codeine is highly habit forming . When physical dependence has developed, withdrawal symptoms may occur if a person suddenly stops the medication.
Withdrawal symptoms include: drug craving, runny nose, yawning, sweating, insomnia, weakness, stomach cramps, nausea, vomiting, diarrhea, muscle spasms, chills, irritability, and pain. To minimize withdrawal symptoms, long-term users should gradually reduce their codeine medication.
Overdose: Without mincing words, if you overdose on codeine you die. Rappers like Pimp c and Fredo Santana, died from overdose of this drug..
Cannabis
Cannabis also known as marijuana is also a pshyco active drug from the plant cannabis. This is the most commonly used illicit drug in the world.
Cannabis is often used for its mental and physical effects , such as a “high” or “stoned” feeling, a general change in perception , euphoria (heightened mood), and an increase in appetite. Onset of effects is within minutes when smoked, and about 30 to 60 minutes when cooked and eaten.
They last for two to six hours. Short-term side effects may include a decrease in short-term memory, dry mouth, impaired motor skills, red eyes, and feelings of paranoia or anxiety. Long-term side effects may include addiction, decreased mental ability in those who started as teenagers, and behavioral problems in children whose mothers used cannabis during pregnancy. There is a strong relationship between cannabis use and the risk of psychosis.
The adverse effects of this drug  varies based on the type of cannabis ingested, and they include:
A. Cannabis sativa also known as skunk (sk): this type of cannabis contains up to 3- 40% of CBD (Cannabinoid) which increases the pshyco active agent in the plant.
B. Cannabis indica also known as Arizona, colorado,PawPaw: This type of marijuana also contains a very high concentration of THC TETRAHYDROCANABINOL which is also called the (couch lock effect) this is used medically to induce sleep in some states.
C. Cannabis Ruderalis also known as Igbo, wiwi: this contains the lowest CBD concentration.
It must be note worthy that smoking is  never the best way of getting intoxicated beacuse it poses the risk of having lung cancer. if  you’re smoking alone and one blunt does not do the magic, is either you’re smoking bull nugget or your body is ready for crack.
Moreover it has been rumoured that the use marijuana is not addictive , I kid you not it is indeed addictive.
Cannabis is consumed in different ways:
smoking, which typically involves burning and inhaling vaporized cannabinoids (“smoke”) from small pipes , bongs (portable versions of hookahs with a water chamber),
paper-wrapped joints or tobacco-leaf-wrapped blunts, and other items.
vaporizer , which heats any form of cannabis , causing the active ingredients to evaporate into a vapor without burning the plant material.
Cannabis tea , which contains relatively small concentrations of THC because THC is an oil  and is only slightly water-soluble. Cannabis tea is made by first adding a saturated fat to hot water (e.g. cream or any milk except skim) with a small amount of cannabis.
Edibles , when cannabis is added as an ingredient to one of a variety of foods, including butter and baked goods.

Studies have shown that long term use of  Cannabis usually causes no tolerance or withdrawal symptoms except in heavy users. In a survey of heavy users, 40% experienced withdrawal symptoms when they tried to quit marijuana, such as craving, irritability, boredom, anxiety and sleep disturbances.
Crack
Crack cocaine, also known simply as crack,loud,or bonzai, is a free base form of cocaine that can be smoked. Crack offers a short but intense high to smokers. It is  the most “addictive” (effective) form of cocaine.
Its initial effect is to release a large amount of dopamine ,a brain chemical inducing feelings of euphoria.
Primary abuser of this drug often consume it in the following ways: The most commonly ways of consuming this drug in Nigeria is either mixing with either marijuana or tobacco.
Adverse side effects includes : lung, liver, kidney damage. increasing irritability, restlessness, and paranoia.
This may also result in a full-blown paranoid psychosis, in which the individual loses touch with reality and experiences auditory hallucinations. Vertigo, muscle spasms, amphetamine poisoning.
Seizure and convulsion, respiratory depression, ‘coke bug’ this is a feeling where the affected people believe they have parasites crawling under their skin. Risk of cardiac arrest, and sudden death. Among others.
On the final note there’s no safe way of getting high. Every drug you ingest poses a high risk of killing either instantly or slowly. Even an ordinary Tylenol or paracetamol has been said to cause liver damage.
The only way is not to start because once you start it’s VERY hard to stop. You would be doing a great favour to yourself and the world around you by fighting addiction to these substances.
-Accuracy 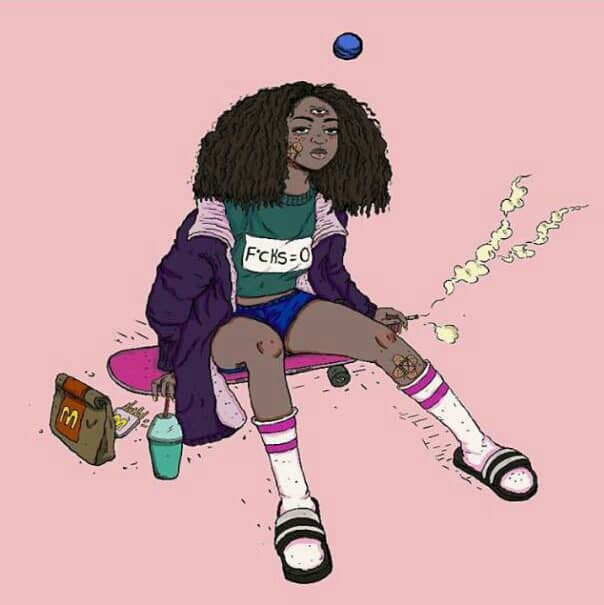