Police in Dubai may soon have access to functional hoverbikes, according to AutoBlog, which reported the Dubai Police unveiled the new technology in conjunction with Russian company Hoversurf at the Gulf Information Technology Exposition last week.
Per Autoblog, the Scorpion hoverbike is capable of flying approximately 16 feet (five meters) in the air, moving at a speed of 43 miles per hour (70 kilometers per hour) and carrying 660 pounds (300 kilograms) of gear. It’s thus capable of clearing traffic-packed roads, but one serious drawback is the unit’s limited, 25 minute charge capacity.
The Scorpion’s rotor blades also look ready to chop through anything it might bump into, like humans, and sort of looks like it is as dangerous for the operator to fly as for anyone who might wander into its path. 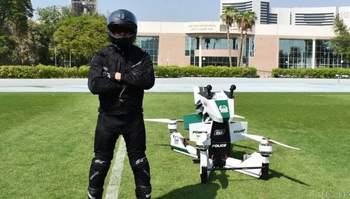