~~~~ Ukor Jonathan and Bakare Gbolahan
Mr. Umar Saidu Isa, popularly known as, Dynamic-galvanizer, has held his album launch themed “Man of the Moment” on Saturday, 19th May, 2018 at Mazabs for Events, Tanke, Ilorin.
The motivational event was graced by high profile individuals from the University of Ilorin and Kwara State University in the likes of Dr. Mahfouz Adedimeji, Alh. Jublil Yusuf and also reputable unions like the Union of Campus Journalists (UCJ), Unilorin Chapter, who also launched and supported the album with whooping and exciting amounts.
Many other motivational speakers and poets were allotted time to lecture and perform, and take the audience to a journey of life through their words.
The incumbent president of UCJ Unilorin, in his speech titled; ‘Believe in yourself even when nobody believes in you,’ projected how he came for his second degree in Law without minding age been against him and he also enjoined the audience to focus like an eagle.
After the event, our correspondence met with the Man of the Moment himself for an interview.
_____________________________________________________________________________
UCJ: Congratulations on this massive feat you achieve. Can we meet you?
Mr. Isa: My name is Umar Saidu Isa, I am a poet, an expressional motivational speaker, singer, rapper, audio producer, voice over artist, a graphic designer and an entrepreneur. I am also a staff of the Kwara state University.
UCJ: You go by the name – ‘The Dynamic Galvanizer’. Can you tell us the origin or etymology of this choice of name?
Mr Isa: I choose this name because most of my poetry works are based on motivation. To galvanize means to motivate people into action, so I galvanize.
UCJ: When did you start writing?
Mr Isa: I started writing in my secondary school…
UCJ: …writing poems?
Mr Isa: Yes, in my secondary school.
UCJ: And you have been performing since then or just writing?
Mr Isa: Yes, I’ve been performing right from my JSS 1, right from 2006.
UCJ: What can you say of the interest Nigerians show towards poetry as an art?
Mr Isa: Okay. It has not really been that accepted compared to how the pop music is been accepted but we are trying to push it and that is why this kind of event has been organized. So, I could actually encourage Nigerian youths, most especially, to actually put poetry in the same position that they put pop and other music genres…yes.
UCJ: Your style of art is quite unique; you sing, present and rap. Why did you choose to do your performance that way?
Mr Isa: Well, I wanted it to be mixed up since in Nigeria, this kind of environment, most people (like 90%) are interested in entertainment, so I decided to spice it up a little bit with rap and songs because they wouldn’t want to listen to just poetry like that.
UCJ: Would you agree that poetry is boring?
Mr Isa: It depends on the way you put it, you know…it depends on the way the poet writes it or presents it, that’s what makes it boring. But for people who are not intellectuals, they say it’s boring, people who only are focused on the beats of music or are used to hip-hop or fast music would not appreciate poetry because they only get high with the musical instrument instead of listening to the words, so such people would not appreciate poetry.
UCJ: Okay, now “Man of the Moment”, the theme of the event. What inspired that theme?
Mr Isa: Okay! I named the album after the fourth track of my album which is ‘Man of the Moment’. It speaks about constant struggles towards your goals, and that when you struggle constantly, success would definitely smile at you. And I’ve seen this event as an achievement, so I believe today I’m the man of the moment. Being the man of the moment means you have achieved all what you have been struggling for and today you are standing proudly to claim it.
UCJ: The African time syndrome surely manifested here today. How did you feel or what was running through your mind at that time?
Mr Isa: Well, I wasn’t too bothered because I have seen a lot of event being treated that way – when you say 10:00, they come 10;30; when you say 11:00, they come around 11:30 or 12:00. And I knew people were definitely going to turn up but they are just used to that attitude towards events. I would like to encourage them to put a change to that.
UCJ: How would you describe the turn-out today?
Mr Isa: Yeah! I’m really impressed with the turn-out today, although compared to some entertainment events they would have had more crowd than this. But looking at an event of this level and having this kind of crowd I’m impressed. So, thank you.
UCJ: How can people assess your motivational works? Do you have a blog, website or through the social media?
Mr Isa: Yes, yes. My audio poetry, songs and other works can be gotten online on my website which is www.dynamicumar.com. Through the social media, you can get it on: Intagram: dynamicgalvanizer, Facebook: Umar Saidu Isa, Twitter: poeticumar and on Whatsapp 07032044605.
UCJ: What advice would you give to upcoming artists that would love to perform poetry?
Mr Isa: I would like to tell them not to give up on whatever it is they are doing because entertainment and hip-hop is the trend now. So, I’ll like to advice them not to give up on whatever they are doing and try their best to take themselves to the top. They should never give up.
UCJ: Okay. Thank you very much. Do you intend launching another album in the nearest future?
Mr Isa: Yes, yes.
UCJ: Have you started working on it?
Mr Isa: No, I’ve not started yet (laughs). I’m yet to sell this one so…(laughs).
UCJ: Thank you for your time, sir.
UCJ, Unilorin 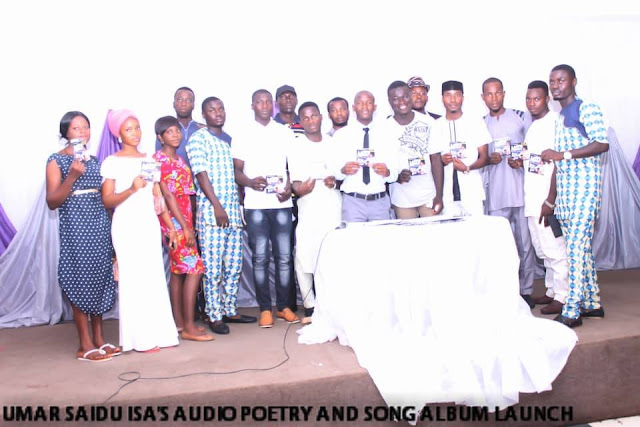