ALBERT Einstein’s secret to happiness has been revealed in 95-year-old notes written in Japan ahead of their auction.
In a note given to a courier at the physicist’s hotel room in Tokyo, the Nobel Prize winner shared his hidden secret to a happy life.
The note reads: “A quiet and modest life brings more joy than a pursuit of success bound with constant unrest.” Einstein also handed the courier a second note that states: “Where there’s a will, there’s a way.” It is reported that after delivering Einstein a message, the physicist did not want the employee to leave without a tip, but due to their refusal to accept because of local Japanese customs, he gave him his secret to happiness instead.
The Nobel Prize winner is reported to have stated: “Maybe if you’re lucky those notes will become much more valuable than just a regular tip.” The quotes come from the Hamberg seller of the notes that chose to remain anonymous. 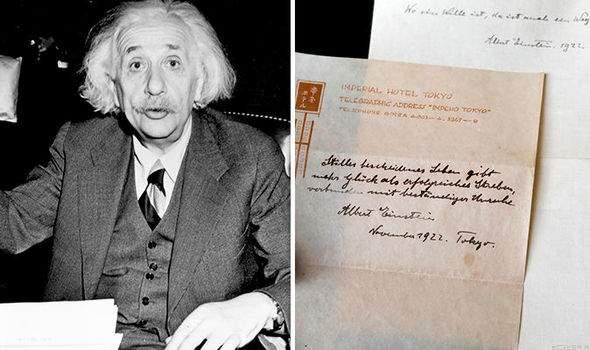