The Niger Delta Avengers has been urged to call its members to sheath their swords, hours after the militant group issued threats to resume attacks on oil facilities in the region.
One of the elders in the region and the spokesperson for Gbaramatu Kingdom, Godspower Gbenekama, made the appeal after a closed-door meeting with the Deputy Governor of Delta State, Kingsley Otuaro, on Saturday in Asaba.
He, however, blamed the government for not keeping its promises to the requests made by the people which he said was contained in the 16-point agenda of the Pan Niger Delta Elders’ Forum (PANDEF).
“The Ogoni cleanup for instance, take off the Maritime University which the Vice President disclosed that N2bn has been approved but up till now, we have nothing.” 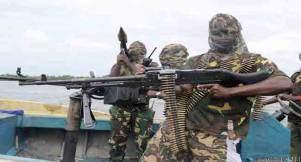