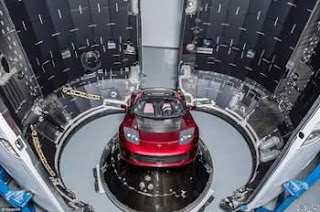 Elon Musk has apparently made good on a joke that SpaceX will mark its first unmanned flight to Mars by delivering a Tesla car to the red planet. The private space company revealed some pictures of the cherry red electric sports car inside the Falcon Heavy.

Scheduled to launch from the same pad at Cape Canaveral as the Saturn V Apollo 11 moon mission next month, the Falcon Heavy is the equivalent of three Falcon 9 rockets. The new Tesla Roadster has yet to be released to the public, but Musk’s other company has clearly provided one for the purposes of visiting Mars. Fittingly, Musk says the car will be playing David Bowie’s Space Oddity on repeat as it makes the journey to Mars.

Although Musk originally made the gag on Twitter, he then told the Verge he had made it up. But it appears the billionaire is planning to follow through on the idea. “Test flights of new rockets usually contain mass simulators in the form of concrete or steel blocks,” Musk said. ‘That seemed extremely boring. So we decided to send something unusual.” Final confirmation appeared to come from a sneaky snap taken by a tourist at NASA’s Kennedy Space Centre.