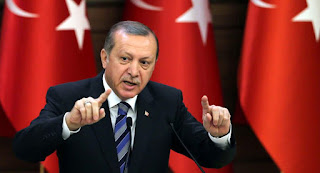 The President of Turkey, Recep Erdogan, has called on parents in Africa to withdraw their children from Turkish-run schools across the continent because the schools are run by those he described as terrorists.

In an interview prior to a three-country official visit to Sudan, Chad and Tunisia this week, Mr. Erdogan said the schools are run by an organisation that uses education as a façade to hide their real intent.

The schools are linked to United States based Cleric, Fethullah Gulen, a former ally of Mr Erdogan turn arch-rival. Mr. Erdogan accused Mr. Gulen as being the mastermind of the July 2016 attempted coup that left 250 people dead. Mr. Gulen has denied the accusations.

“Without any further ado, I will like to mention something. Whether your nephews, nieces and your children, do not send them to either one of these network schools,” Mr. Erdogan said.

“We are warning all our brothers in Africa not to be deceived because the Fethullahists have great sums of money out of their actions. In 1999, the Chief terrorist, fled to the United States to live in Pennsylvania. We have demanded his extradition immediately.”