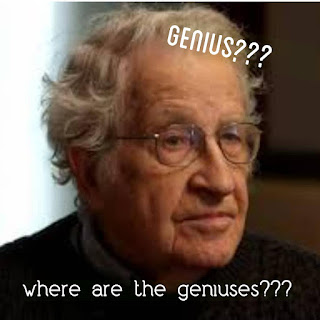 Folks, let us go through a lifetime of dedication and innovation in the systematic study of what was before-time known as the most complex cognitive system, Language.

It might have been that N. Chomsky played a fool of us all when the concept of ‘generative grammar’ began, or didn’t. But if after empirical evidences supported his claims of: a Universal Grammar (UG), the innate ‘Language Faculty’, an unordered bundle of features in phoneme, an infinite number of sentences derivable from a finite set of rules, and the various interactions between the seven ‘golden’ modules of grammar, we would readily accept being fools under the arms of N. Chomsky.

Perhaps, it was this fame and, of course, the ingenuity of N. Chomsky that caused modern linguist to digest whatever theories propounded by Chomsky as the gospel truth. Chomsky fame was sporadic, in fact, his own students (cf. James McCauley, George Lakoff, Paul Posta, John Ross, etc.) initially doubted his qualities of being an ‘accurate’ teacher. It was reported that the students of F. de Saussure published a book posthumously from lecture notes given by F. de Saussure. Now imagine the world-wide shame of being questioned by those you intend to advance your teachings, it’s quite pitiable but even geniuses can be corrected. Chomsky, after some cain-and-carrot techniques, refined the perceived inaccuracy in his 1965 theory and in so doing resolved the protracted academic dispute, alias the ‘Linguistics War’.

If ‘colourless green ideas sleep furiously’, I doubt N. Chomsky had any of such ideas. His presence in almost all nooks and crannies in the field of linguistic is of somewhat ‘disturbing’ to students and potential linguists. Fanatics of Chomsky’s theories would argue that the word ‘disturbing’ is made up of scattered distinctive features; or is contextually ambiguous; or needs to be derived from a ‘deeper’ deep structure; or is a structural verbal phrase, etc. their arguments can be expressed ad-infinitum. Navigate through an up-to-date dictionary, you are most likely to find terms like Chomskyan, Chomskyanism, Chomskyite, and all other (x-)chomsky(-x) related terms. To students and potential linguists, N. Chomsky’s ubiquitous preeminence in the field of linguistics is filled with mixed feelings. Some are somewhat amazed and intrigued by this and would nickname themselves as ‘academic wives’ of Chomsky (forgetting that facts such as age and experience qualifies him of being their great-grandfather); others and most would throw stones at him (their reason? I have no idea). Whatever mixed feelings, the inevitable truth remains that N. Chomsky is one of the giant authorities in the world of research.

But even the brightest of minds make mistakes. The most recent work of N. Chomsky has been criticized as been a ‘structure of unscientific revolution’. His 1993 program, alias Minimalism, although widely accepted by a great number of linguists (which remains puzzling), is empirically baseless. N. Chomsky, again, played a fool of us all, and this time majority of us trusted without questions his claims. “Just so. Given the lack of any obvious content in the basic question that the MP takes as its starting point, it is particularly surprising that so many linguists have chosen to adopt its assumption without demanding additional clarification or empirical motivation.” (Lappin et al. 2000)

N. Chomsky’s ingenuity, however, still remains second to none. Here is what he did: he said ‘Hey! I believe grammar is perfect and derivations should be economical’. And we replied ‘Wow! Nothing is truer’. Then he chipped in that ‘It’s only a program though, open to your criticisms’, and we reply ‘Whatever! ‘. Other things being human, the Minimalist Program (MP) calls out for another chomsky or anti-chomsky who will lead and take linguistics analysis to height beyond N. Chomsky intuition. A question begs – ‘will such a person emerge?’.