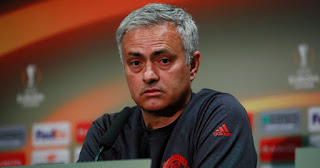 The Football Association has confirmed it is seeking information from both Manchester clubs following a reported incident in the Old Trafford tunnel after Sunday’s derby.

Players and officials from both clubs are said to have been involved – with of the understanding that United boss Jose Mourinho was covered in water and City coach Mikel Arteta left nursing a cut eyebrow – but referee Michael Oliver did not witness the incident and has not filed a report.

Manchester City ultimately edged their rivals United 2-1 courtesy of goals from David Silva and Nicolas Otamendi, stretching their lead at the top the Premier League to 11 points.

It also meant Pep Guardiola’s side became the first to win 14 consecutive top-flight games in a single season.