Facebook is about to rollout a version of Messenger aimed specifically at kids, known as Messenger Kids. The emphasis is on safety, with all contacts having to be approved by parents.
The app will be iOS-only when it launches in the next few days, with an Android version to follow later in the month.
Engadget reports that the app is designed to overcome a couple of issues. First, the fact that many messaging apps require a phone number, which young kids don’t have.
Second, safety. An adult with a facebook account needs to create the child’s account – which is not a Facebook account, but one specific to Messenger Kids – and they then need to approve all contacts.
Both kids and parents can block contacts at any time. If the child does it, the parent is notified. If the parent does it, the child cannot re-add them. Additionally, either can report a problem contact through the app.
Facebook says it has also screened all the stickers and other graphics to ensure they are age-appropriate, and there are no ads. 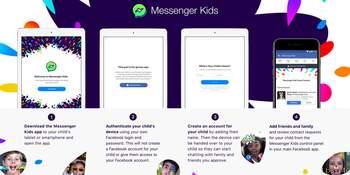