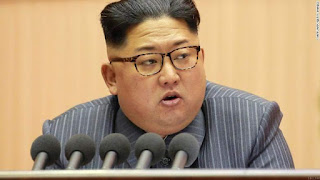 The United States is “closer to a nuclear war with North Korea” than ever, Adm. Mike Mullen, a former chairman of the Joint Chiefs of Staff, said Sunday, adding that he does not “see the opportunities to solve this diplomatically at this particular point.”

The North Korean leader addressed the threat of war in a New Year’s Day speech on Monday. “We are a responsible nuclear nation that loves peace,” Kim said. “As long as there’s no aggression against us we do not intend to use nuclear powers.” “The US cannot wage a war against our country at all,” Kim added.

“The entire mainland of the US is within the range of our nuclear weapons, and the nuclear button is always on the desk of my office. They should accurately be aware that this is not a threat but a reality.”