President Donald Trump was wrong to claim he has dramatically changed the military approach to fighting ISIS, former Defense Secretary Ash Carter said Friday.
The plan to capture the terrorist group’s de facto capital of Raqqa, Syria, was put in place two years ago, Carter told CNN.
“The plan … was laid out two years ago, and has been executed pretty much in the manner and the schedule that was foreseen then,” Carter told Jake Tapper on “The Lead.” US-backed forces fighting ISIS in Raqqa announced this week that “major military operations” in the city have ended and that the terrorist group has lost control of its self-declared capital.
Carter, who served as defence secretary under former President Barack Obama at the end of his second term, gave credit for the defeat of ISIS in Raqqa “first and foremost” to the military. He also said that he and Joseph Dunford, a former Marine Corps commandant who is now chairman of the Joint Chiefs of Staff, actively tried to accelerate the plan to defeat ISIS under Obama, and they always got approval from the president.
Carter added: “I can well imagine that if my successor, Jim Mattis, had ways of moving things along, then he would have recommended them as well.”
UCJ, UNILORIN. 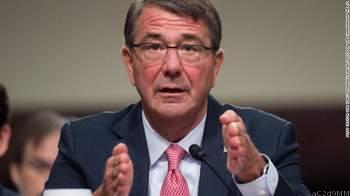