The SRC of the Faculty of Social Science has requested for an apology letter from her Welfare Secretary and Speaker concerning matters on souvenir distribution in the faculty during an SRC sitting on Saturday,  May 19th, 2018 at the Faculty of Social Science, Unilorin.
The Welfare Secretary; Com. Kenny was questioned on the distribution of souvenir in the faculty for 2017/18 session as the number of souvenirs given by the UICPC did not tally with that distributed in the Faculty. The welfare secretary was however initially suspended but was recalled and told to tender an apology letter with a fine.
Com. Kenny explained that the UICPC gave him 600 souvenirs and instructed him to wait for some days. Upon recounting, the souvenirs were 587, however; 2, according to him were taken forcefully by the class reps of Political Science and Criminology, 6 CEC members took some “unauthorized” and the remaining 5 were no where to be found.
The Vice President, Com. Ayoola, objected that the souvenirs were not taken unauthorized but by the President’s order as he felt they might be busy when proper distribution commenced. Also that she witnessed the class rep. of Political science collecting a souvenir but was not taken forcefully.
Comrade Kenny further buttressed that the sharing formula adopted was: number of 300 plus 400 level in each department, all over the overall, mutiplied by 600. He however claimed to have distributed the souvenirs according to the adopted formula.
On the other hand, he revealed that he deducted the number of books collected by the CEC from those given to their various departments. For instance, political science was meant to collect 77, but was given 72 since some members already were in possession of some.
Hon. Sanni from political science blamed the welfare secretary and  asserted that he saw the welfare secretary give a keke driver a copy of the souvenir. Com. Kenny however denied it.
He stated that the issue on ground was borne out of selfish interest and not for FOSSSA’s interest.
He explained further that during the week, himself and the speaker; Ajala Abdul Salam had spat on each other’s face and that the speaker said “I will deal with you unconstitutionally”. He claimed to have replied in Yoruba with words that meant “when the Honourables are not in their right senses”. This assertion was confirmed by 2 witnesses in the house.
Sen. Agbarism suggested that the president and the welfare secretary take responsibility for the missing souvenirs by paying a sum of #140 for  each souvenir as a suspension would not help but lead to mutually assured destruction (MAD).
A motion was moved and seconded for the speaker to step down from his seat to be represented by any other honorable since the matter  involved the speaker himself. Hon. Goni Farook was appointed the acting speaker.
The house resolved that out of the 13 missing souvenirs, 5 would be the President’s responsibility as they were taken by his order and the remaining 8 will be provided by the welfare secretary.
After much deliberation, a 21 working days suspension was considered and comrade Kenny was declared suspended for 7 working days.
On the other hand, a motion was  moved  for the suspension of the speaker from 2 sittings. But the acting president suggested he should pay a fine instead and direct it to the director of welfare.
A motion for an open apology from the speaker was moved and finally agreed upon with 2 honourables appointed to follow up.
However, in other to strike balance, a motion was moved for the recall of the suspension of the welfare secretary in substitution for an apology letter and fine for the missing copies of the souvenirs. 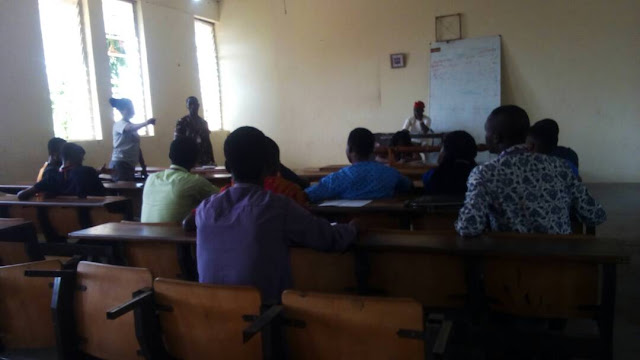